The Gansbaai suburb of De Kelders, which is Dutch for The Cellars, derives its name from the presence of numerous expansive caverns formed in its porous limestone foundation.

These caverns were formed millions of years ago through the erosive action of underwater aquifers. They were then opened up along the coastal cliffs by rising sea levels and pounding waves, forming huge caves that would later become the home of Middle Stone Age people and eventually Late Stone Age people known as the Khoikhoi. The most famous of these caves is Klipgat Cave (stone hole), named after a remarkable window-like opening that yields spectacular views over the bay.

Stones and Bones - The Stories They Tell

Three factors made the Klipgat Cave ideal for early human habitation: the abundant shelter that the cave provided, the presence of a fresh water spring and the proximity of a constant food source - the ocean. This was hunter-gatherer paradise.

Excavations in 1969 revealed 2000 year-old pottery, stone and bone artifacts and the remains of shellfish, fish and other animals that the Khoikhoi bushman had discarded. The Khoikhoi (‘people people’ or ‘real people’) are a historical division of the Khoisan ethnic group, the native people of Southwestern Africa.

Sheep bones were also found indicating that they were already herding sheep at this early stage and possibly even kept dogs and cattle. The Khoikhoi people of the area, more accurately referred to as the Quena people, thrived up until the 18th century when the first white settlers arrived. Around 1713, a devastating smallpox epidemic nearly wiped out the entire local population. Colonial expansion and land seizure further eroded their social structure and traditional way of life. Many became workers on farms while others were incorporated into existing clan and family groups of the Xhosa people. Their ancient fish traps known as visvywers (walls of rock packed to create tidal pools) can be seen at several sites along the coast, some of which are still in use today.

In 1811, their descendants built the first permanent settlements in the area under the Milkwood trees at Stanford Cove, founding the fishing culture of Gansbaai. 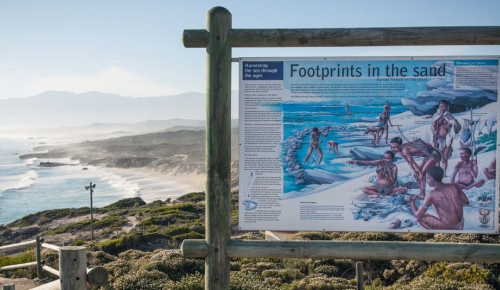 Digging Even Deeper into Ancient History

The excavations at Klipgat Cave did not stop with the Late Stone Age findings. In still deeper excavations conducted in 1992, stone tools, bones and human remains were discovered indicating the presence of Middle Stone Age people an estimated 70,000 years ago. These findings are amongst the oldest remains of modern-looking Homo Sapiens in the world, reinforcing the theory that modern people originated in Africa before dispersing around the world.

These modern humans evolved from their archaic descendants more than 200,000 years ago and displayed distinctive anatomical, technological and cultural developments.

As one of only three places in South Africa where such old remains have been excavated, Klipgat Cave is one of the most important historical sites in the Western Cape and of World Heritage significance.

Meander Through the Millenniums

Join Grootbos on a guided tour to discover the wonder and mystery of this ancient dwelling surrounded by spectacular coastal scenery. Hear innumerable stories of the perils and pleasures of yesteryear’s people unfold as each deposit-layer reveals fascinating secrets of the tides, temperatures and living conditions of those primitive times.

Find about more about our special offers of up to 45% discount off the normal rates plus value adds.