Walker Bay, which extends from Gansbaai to Hermanus, was named after an officer of the Royal Navy who must have been well pleased to have such a spectacular bay named in his honour.

Originally gaining popularity as a picturesque holiday destination and angler's paradise, today Walker Bay is world-famous for being one of the best places in the world to do land-based whale watching.

Every year between the months of June and December, hundreds of Southern Right Whales congregate in the sheltered shallow waters of Walker Bay to mate and calve their young. To ensure that our giant visitors are not disturbed during their nuptial activities, the bay has been declared a Whale Sanctuary Marine Protected Area, which means that no unauthorized boats of any kind are allowed within its boundaries during the peak months of July to November.

The low cliffs and coastal pathways of Hermanus on its northern shore and those of De Kelders on its southern shore offer unsurpassed land-based viewing opportunities with whales often coming within mere meters of the shore.

There is a friendly debate between these two towns about who has the best whale watching but concentrations tend to vary according to the prevailing wind. Weekly air-counts however point to De Kelders having more whales closer to shore. Hermanus, on the other hand, has a much more developed tourist infrastructure in terms of restaurants, museums and shops. Hermanus also boasts the world’s only ‘whale crier’ and celebrates the arrival of the whales every year with the event-filled Whale Festival in late September. 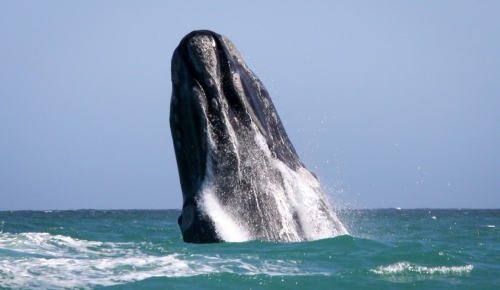 Besides the Southern Right, other whale species also make an occasional appearance. Humpbacks migrate through the region between the months of May and December while the shy Bryde’s Whale can be found further offshore all year round. The best months for whale watching are October and November with numbers tapering off in December.

With its background of towering mountains and pristine coastal environment, even after the whales have left, Walker Bay remains an idyllic marine landscape and a destination worth exploring in its own right.

Visit Grootbos this summer and discover unparalleled luxury and immersive experiences with our Summer Sun Special for South African Residents.

Find out more about our special offer that includes a 45% discount on our normal rates, along with 50% off spa treatments and a complimentary bottle of wine. Valid from 11 January - 30 April 2023.